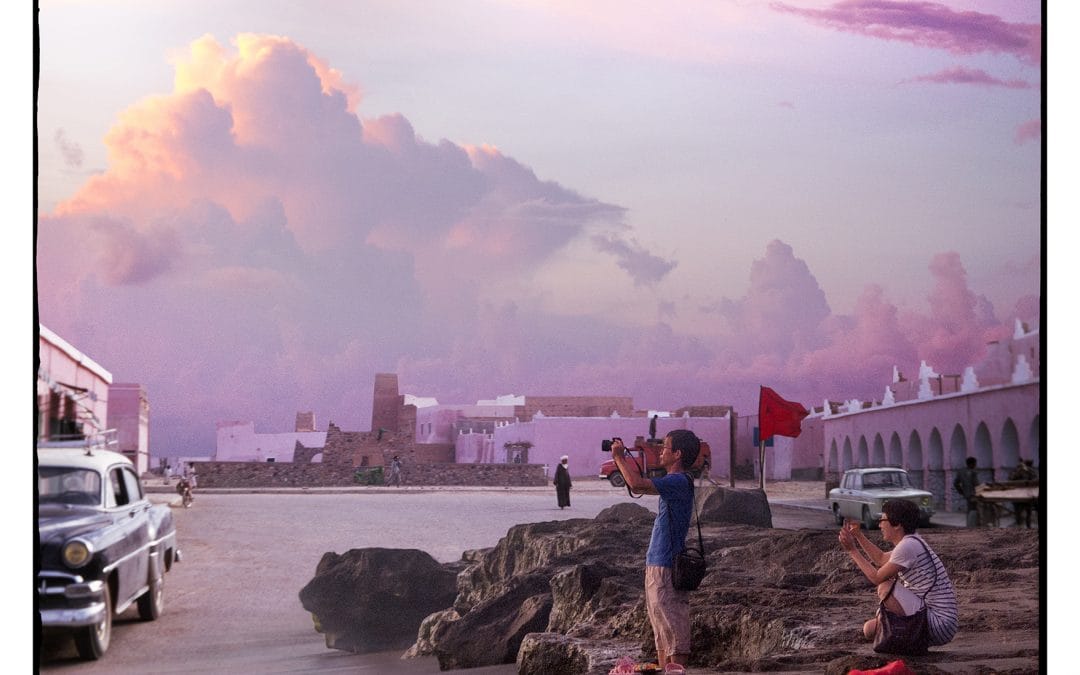 It’s no easy task summing up the art of Tiphaine and Sylvain Bonnaud Van de Sype. Raised in Orléans, France, the two resettled in Brussels, Paris and New York. Then, in the blink of an eye, the duo pulled up their roots and set off on a two year long adventure around the world.

Now resettled in their apartment-cum-art-studio, their multi media art brims with high intensity emotion. Just how did they set about transforming their lives into a dream of nomadism? The dynamic pair took a pause from their busy process to fill us in on the scheme of their captivating universe.


When did you embark on your journey around the world and what experience impacted you the most during this exploratory period?

We left New York sort of as a joke on the 1st of April 2015, but then we didn’t end up coming back until October 2016. We set out just the two of us, not even knowing what we would do in the next week, or what would become of us after the trip.

Free from the conventional restraints of time and space, we planned on a lot of couch surfing. We met people in hopes that they’d randomly be willing to share their lives with us for anywhere up to two weeks. Sure enough, they were ready to grant us access to their city, best friends, food and bars. We traveled for thirteen months before taking about half a year in France to rest and digest everything that had passed through our eyes, stomachs and lungs.

[Sylvain] The first weeks of the journey were extraordinary. The feeling of complete freedom is intense- no job, no apartment, no friends, no family. And the last days of the trip were powerful, too. By that point we were so exhausted that we barely came back in one piece.

[Tiphaine] Now, in my mind, the trip is like a ball made up of entangled moments linked eternally.

During your travels you started an online magazine to express all the memories you were building.
The result was a sort of diary.

Can you describe this project?

We needed to externalize all that we were going through rather than keep it bottled up. That said, we knew that posting content to social media just wasn’t our style. The desire to properly express our state of mind and the ideology of this journey was important. We created a magazine to serve as memory, a taste of what we might have felt during each month. The website was kiefbruissant.com (loosely translated, « a rustling nap ») presented by HACHETAGUE magazine.

What was the main inspiration behind this extraordinary experience?

The main inspiration was being here. With them, and with ourselves. Being here and having nothing else more important to do. Spending time with people, watching them live.

[Sylvain] It was kind of a question of “How do you manage your life and stay alive? How do you to find a meaning and purpose in all that you do? Can I try and stay a bit?”

The most important thing we brought with us was our chameleon’s skin, which we tried to wear every day. Not to erase or hide ourselves but to respect, empathize, connect.

We made a point of never judging, looking at things as if everything was normal even when everything was extra-ordinary. Not being a traveler but traveling, not being photographers but taking pictures. Perhaps becoming a friend, a son or a sister for few days.

[Tiphaine] The idea was to be part of others’ lives, and I discovered that one of our strengths as a couple and as individuals is that we can live everywhere, making each place our home.

Which are your favorite writers and why?

Mathias Énard, Jean Christophe Ruffin, Marguerite Duras, Laurent Gaudé. They all tell original stories with this feeling of fantasy, like remembering an intense dream. They respect words, they care, they create, they invent. We come away from their writing with precise memories of blurry stories.

We love cheesy murders, cold cases investigation stories and good thrillers, too. A murder investigation, is a way to answer through a process the questions of who, what, when, where and why. They achieve something truthful. A search for truth. And I bet it’s also a way to connect with horror which, in turn, activates a desire to generate beauty.

How much has your life really changed?

Our life has changed. We’ve experienced too many people’s lives. We have a clearer sense of what the world is like. Empiricism of the world. Crossing borders on foot, boats and trains, meeting the poor and the rich, processing wealth, racism, love and starvation.

Crossing social borders is essential. Because of discernibility, we may be more sensitive, delicate and marked. We hope it will mellow a bit. Maybe this journey liberated and rooted our political thinking.

In our art, we try to reconcile our identity with who we were, who we are and who we could be.

[Sylvain] The more tolerant I become, the less I tolerate intolerance.

[Tiphaine] It’s hard to do a trip like we did, based of the idea of tolerance. I realized that most of the people in the world are kind and they care about others, but people fear what they don’t know. As an artist, you need to be curious. It’s hard for me to take in the stupidity of intolerance and the fear of “the other.”

To what extent has the experience of extensive travel stayed with you? Has it popped up in your dream life, for example?

Nowadays, little things in every day life remind us of the people we met and the stories we took part in. We dreamed a lot during the trip as we never had before, and those dreams involved an unusual amount of violence. We even dreamt of murdering people sometimes.

Which are the places you the most… and the least?

[Sylvain] We went on this long trip to so many places we didn’t know.Today, I miss places I already knew before the trip. I miss Europe a bit. I would love to spend more time in Italy to connect again with people who don’t scramble after and not live for something that most likely will never happen, that understanding of “The American Dream.”

[Tiphaine] Sometimes I dream that I live in Ko Phayam, an island in Thailand. My daily life there consisted of going to swim in the morning before breakfast. I lived barefoot in my bathing suit, eating delicious rice with coco milk. Every night with our new fellows, we all gathered around a fire on the sand to watch the sun set. It was so simple. One day, I may be able to live a more simple life.

What would you say was your most beautiful experience during your travels, and your ugliest?

The worst was food, and way a lot of men in India regard women in general. This would take a long time to explain and I my explanations might be biased. The most beautiful thing we did was to travel by buses, trains and boats through Africa.
We went from Johannesburg to Nairobi, through South Africa, Botswana, Zambia, Tanzania and Kenya.

Most people on earth eat shitty food. Everything is fried in palm oil. And oh boy, how can we even talk about Indian men? That’s a whole discussion. What we realized is that our own experience of a given country was influenced by the country we’d just came from. This part of Africa we saw before right India was so beautiful- people, landscapes, animals, you feel emotions you will never feel anywhere else. It’s intense.

How much have these adventures changed your artistic research?

Our aesthetics have always been in flux because our jobs were related to applied arts, fashion and architecture. Now, we live and create together in our studio, as we always did, where we live. What we do reveals connections and links between us. Our approach tries to put pieces together. We gather different memories that don’t belong together, into artistic answers. Time, space and people mingle in our research.

We go from very grounded life experiences to poetic fantasy answers. Our work connects real people who will never meet, real sunsets that will never illuminate other landscapes. In brief, we create some non-existent time-space continuums that originate from real ones.

Unlike Tiphaine, my [Sylvain’s] work has a slight melancholia. I wish we could have traveled in the world our grandparents knew. Our world is full of signs, advertisements, useless things. Our generation had to face forward growing up. With globalization, we have a taste of the old world that we still remember, and at the same time we dive into new world causes. But I can’t help myself to remember the smell of the old world.

I [Tiphaine] have a taste of optimism in my work through colors and a general perception. Maybe I need that in order not to give up on having children, so my work needs to be beautiful and have some positivism within it. My work is more related to imagination, dreams and memories. I’m in a fantasy but it’s not fairy tale. I know reality.

We both need to create beauty, we could not end up with a project that has no beauty. Our lives need something as simple as beauty because the world is ugly.

In the words of Mathias Enard, «Combien faudra-t-il d’oeuvres d’art pour mettre la beauté dans le monde?» (How many works of art will it take to bring beauty into the world?)

Maybe we create in order to beautifully mourn our future lives with sweet melancholia and slight optimism.