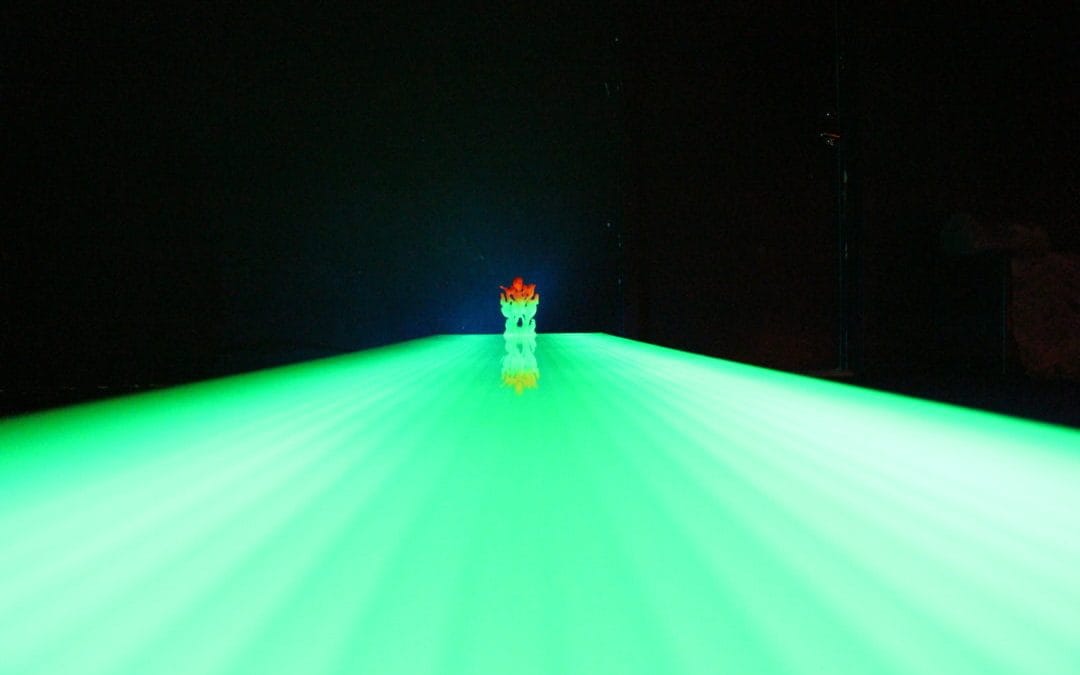 I met Ebba Petrén this summer in Sardegna. She is a member of Nyxxx with a.k.a. Elize Arvefjord, Tova Gerge, Kerstin Weimers, Albin Werle, Gabriel Widing.

Nyxxx is a collective group of artists from Sweden who works in art performance, focused on audience experience. They had a several pieces, workshops and a lot of research in a wide range of contexts.

This mixed group of artists is very interesting, all of them have a different competence: sound designer, light designer, dramaturg, director, game designer and a visual artist.

One of their art performances is Tactical Meditations, this is the manifest:

You turn your back to the world and step into a space of light and sound. You look around. Someone comes up to you with a proposal. You accept. The withdrawal accelerates. You connect to different games, systems and bodies. You explore and produce new tactics. You are droning. You join the swarm. You disconnect. You rest your way into an action. You install a political paradigm. There is a shift of paradigm. You identify, reinforce and modify your strategies for survival. They are now no longer about survival, but about transgressing the life you are trying to cope with. You look back at the world from the other side of the black mirror. You touch the screen.

Ebba when was born Nyxxx and how?

We came together because we shared an interest in making performances where the visitors enter into the world of the performance with their body and are able to act within that frame. I wanted to do this in order to touch the audience on a more intimate and collective level. I mean, when you enter into an altered social reality, which the performance setting is, it means you’ll meet outside of your ordinary selves, which can be an intimate experience.

We came together to work on a headphone based performance called The Avatar Condition. The audience became “avatars” to a voice that guided their bodies for about an hour. This was in 2011. At that point Nyxxx wasn’t born yet, but after this first production we continued working together, we formed the collective and decided on a name. Nyx is the goddess of the night in Greek mythology. She is the mother of the God of sleep, God of dreams, God of intimacy and many more shadowy gods.

What was the most interesting experience for you during art performance?

There are som many kinds of interesting. Do you mean something I experienced in my artistic practice or as an audience member?

As an audience member I think it is interesting to get my perception of the world challenged or altered. It happened to me when I visited Symphony of a Missing Room, by the artist duo Lundahl&Seitl. Using choreography and simple technology, headphones and goggles, they set up a convincing simulation that my body were in another time and space. It blew my mind.

In my own practice I had many interesting experiences during play tests with audience groups before the premiere. The material is still in process, and there is a possibility to ponder new designs. We allways take time to talk with the test group. Those conversations are often very sincere, philosophical and inventive. I would like more artists to open their processes for audience on an early stage. My parents work in theatre and I grew up watching theatre rehearsals. There you watch failure, repetition, change, cutting, discussions and starting over. So much is learned in this process, that is lost when the final result is presented.

Which is the method of creation with your partners?

There is not one fixed method. It depends on the project. We use tools from game design as well as choreography, theatre and visual arts. Often we start out with a concept of the whole work, that we discuss among us. We ask ourselves things like; what are the aestetical consequences if we chose this or that starting point? Then we start to collect fragments and try out small scenes, that are later put together. When we come together to work we often use collaborative tools like collaborative writing, role-play and game testing. We use to invite test audience very early on in the process, and change the work depending on their feed back. We also read, theory and philosophy is important to our work.

How do people react when you propose to be part of yours art performance?

With curiosity and care, most of the time. It occurs some nervous feelings too, I think. It’s changing with time though, as our audience gets to know what to expect from us.

Also the performance scene the last years have proposed so many different ways of being part of a performance work, at least in the circles we are part of, and our way is one out of many. How is that in Italy and where you are active?

Where did you do Tactical Meditations and where was the most interesting result for you?

We did it in Stockholm and Malmö at two venues for contemporary theatre and dance (Turteatern and Inkonst), in black boxes. We did it in Copenhagen in a white cube art galley that is part of the Royal Art Academy. We did it in Vienna outside at the back yard of MuseumsQuartier and in a café/co-working space. So we performed in theatre context, visual art context and in (semi) public space. Tactical Meditations is a collection of meditations that we do together with the audience and they turn out different each time. I really liked to peform it outside, because of the casual atmosphere. It was like a pic nic where we mingled with the future and our cyborg bodies. Some of the meditations need more focus and a non-windy enviroment, like the tarot card-mediation. Outside the cards just flew away! But everyone who came to the performance could bring a deck of cards back home and continue to play with their friends. It would be nice to show a couple of those cards as illustrations to this interview?

What will be the next performance? And which one is the “topic”?

We have a few different things coming up. One I can tell about is a play based on Kafkas fantastic novel The Trial. It will premiere next spring in Borås in Sweden. We will have two different audience groups. One will be on the inside, on stage, in the scenography together with the actors, acting as the Trial itself. This part of the audience will be guided by voices in headphones, just like in our first work The Avatar Condition. The second part of the audience will watch the play from the outside, as regular theatre audiences uses to do. Both groups will follow the main character, K, as he tries to find the inside of the Law and to navigate through the unknown process he it put under. They will follow from different perspectives.

How many days a week you practice with your group?

We are all working full time as artists in our different fields and we are often in different cities, engaged in different projects. We talk regularly on Skype, Messenger and Google docs. Of course, we meet when there is a rehearsal period coming up. To meet all of us in “meat space” is an uncommon but great pleasure.

Where do you like to have performance and which kind of audience could be the “perfect one”?

It would be great to perform in Italy actually. There are several Italian thinkers that have informed and inspired me a lot.

Generally I like to perform for mixed age groups. It’s always nice when the audience brings their own interest into the work. For example in Tactical Meditations there were a lot of space for the audience to think together with us and form the work with their voices. 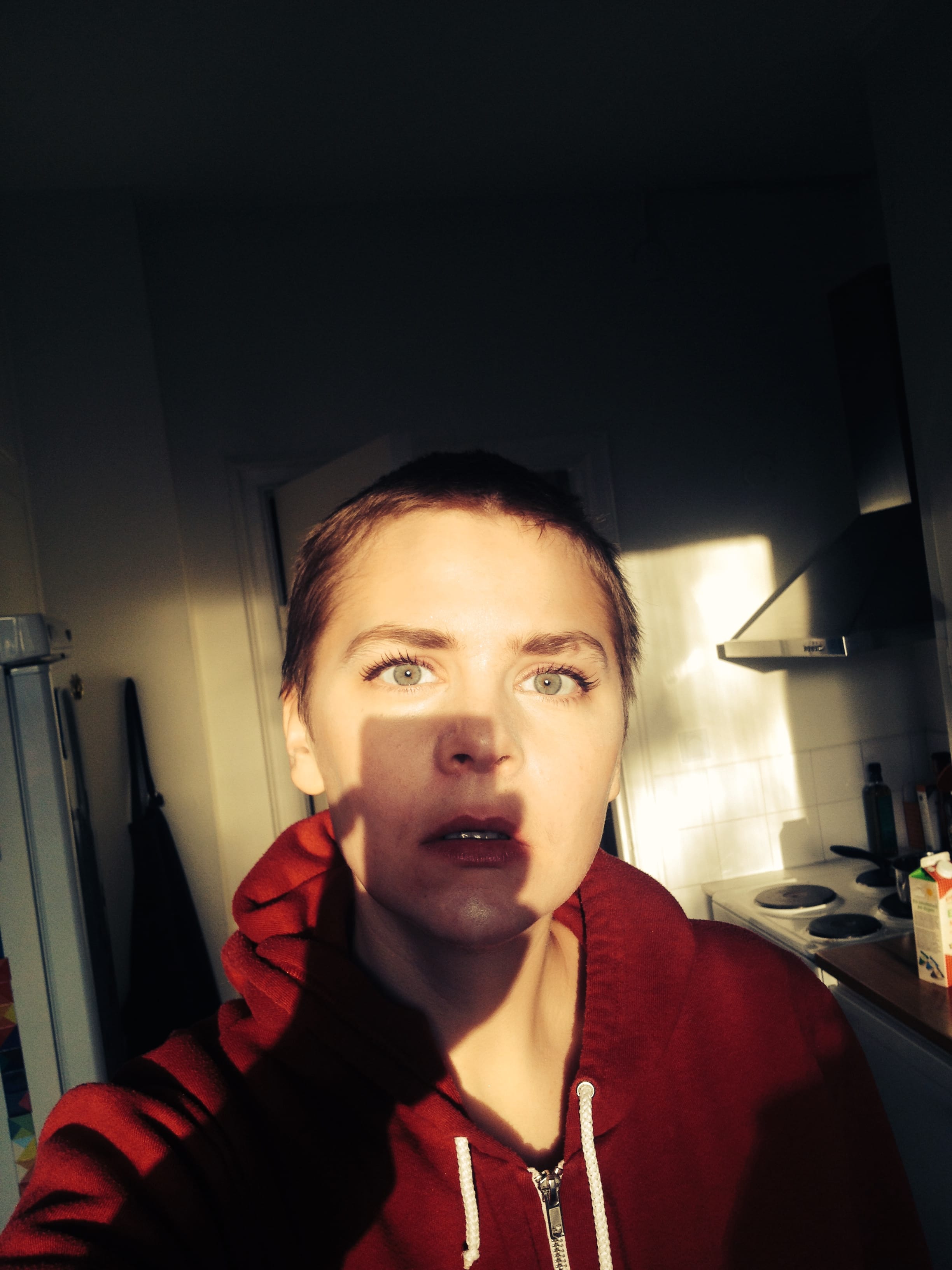 The Moshpit. Card from the Cyborg Tarot Deck (2016) Illustration by Albin Werle and Gabriel Widing 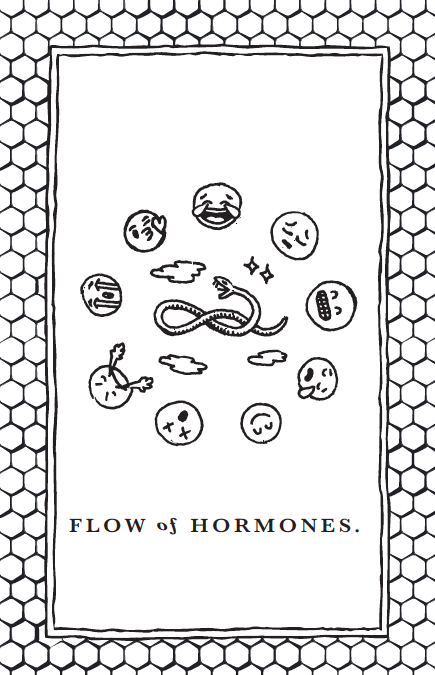 Flow of Hormones. Card from the Cyborg Tarot Deck (2016) Illustration by Albin Werle and Gabriel Widing

The Drone. Card from the Cyborg Tarot Deck (2016) Illustration by Albin Werle and Gabriel Widing