Spring/Breaking The Art-Fair Scene In NYC

Another Spring and another Armory week in NYC. It may be the art market overload but Frieze, after Armory after Art Basel the ennui of the art fair format has made me blind to the art part of the equation. Checking my agenda and the time I can dedicate to endless aisles of artist overload, the choice this year is clear: Spring Break Art Show. Created by Ambre Kelly and Andrew Gori the curator driven initiative is a breath of fresh air in the art supermarket week. The risks are higher, the art is bolder, the artists are unapologetic and the experience doesn’t become overshadowed by the urge to sell. The hybrid of open studio week and a condensation of gallery openings, transforms the former Condé Nast former headquarters in Times Square into a mazelike game of ‘what’s in the next room?’

Sparked by the curatorial theme ‘A stranger comes to town’, this year’s edition brings political perspectives that build a powerful and complex narrative about current immigration policies, xenophobia, inequality, division and activism.

This unique format where every booth is designed by an independent curator, instead of galleries, opens up for freer collaborations between artists and curators, unifying the product with the context driving the conversation into deeper layers of thought and observation. Roaming through the corridors of the abandoned building is like swimming in the imaginary of a collective invented world, where all of the brains become one same pond.

I began my tour at Azikiwe Mohammed’s imaginary “New Davonhaime Thrift Store.” Curated by Ambre Kelly and Andrew Gori the immersive installation fuses the five most densely populated black cities in the country creating a participatory experience co-created with local audiences. The New York native multidisciplinary artist has been mobilizing viewers for a decade to reimagine spaces and show the needs and subjectivity of people of color in America. Azikiwe’s main focus is on socially involved projects that recreate the collective memories of a fictional place we might all call home. His ongoing piece “Jimmy’s Thrift” tours the country with eclectic combinations of hypothetically found objects, product of previous research among the community, representing timeless local memories. “What are the items that prove the existence of a location? What are the items that inherently hold stories more than others? Whose stories?”, asks in his article on Artnet about his prior work for Spring Break. “There are placed I have never been but I still know they exist.” 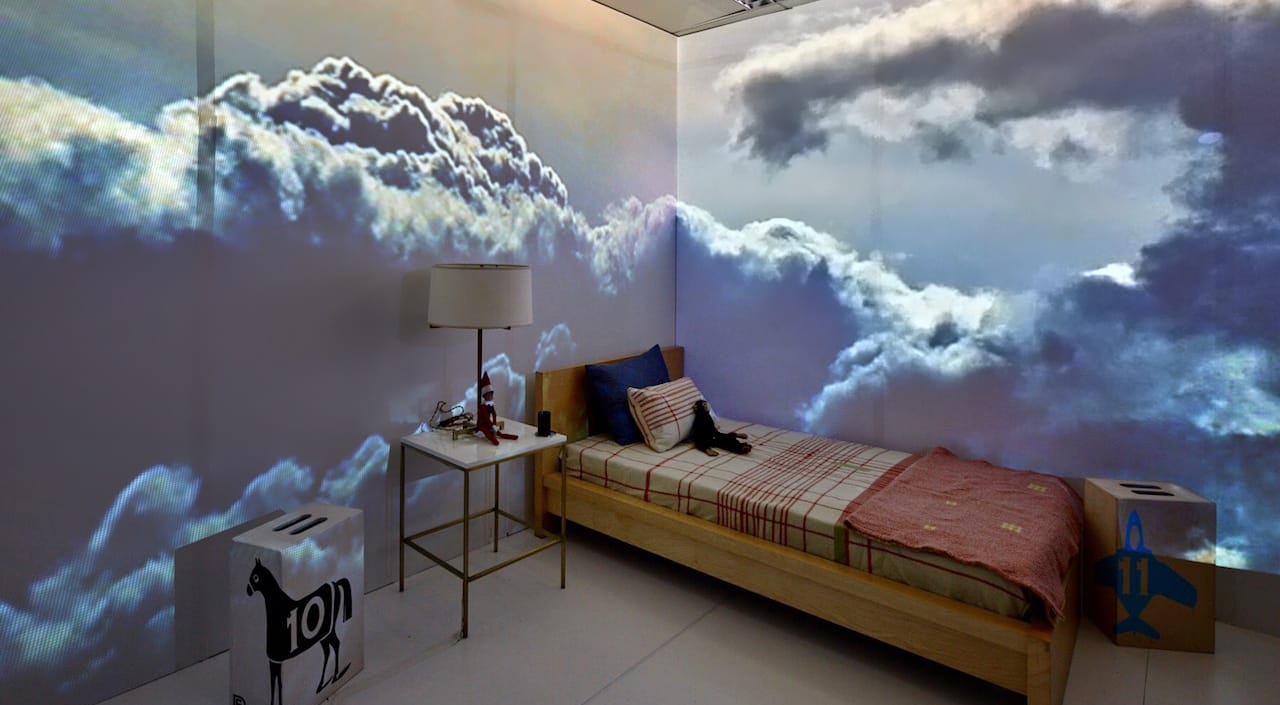 “Self on the Shelf”, An Inmersive Interactive Video Art installation by Laia Cabrera & Isabelle Duverger, curated by Christine Miele. Image courtesy of the artists.

Another unforgettable stop was “Self on the Shelf”, an Immersive Interactive Video Art installation by Laia Cabrera & Isabelle Duverger curated by Christine Miele. For this year’s Spring Break they turned a small boy’s bedroom into “a nightmarish dreamscape in honor of the eponymous elf which has become the symbol of our children’s intimate acceptance of 21st century surveillance realities” as the statement describes.

Laia Cabrera and Isabelle Duverger have a long successful history of transforming spaces with their immersive interactive projection mapping, video art, sound design, illustration and animation, all designed from scratch by them. Their robust career includes theatre scenery, cinema, cultural events and of course, exhibitions, to mention a few. For ‘Self on the Shelf’ they collaborated with interaction designer Nicola Carpeggiani in response to ‘A stranger comes to town’ exploring the conflicts of otherness and the nature of belonging, by bringing the child’s bedroom to life while the space reacts to the visitors’ actions.

“Self on the Shelf”, An Inmersive Interactive Video Art installation by Laia Cabrera & Isabelle Duverger, curated by Christine Miele. Image courtesy of the artists. 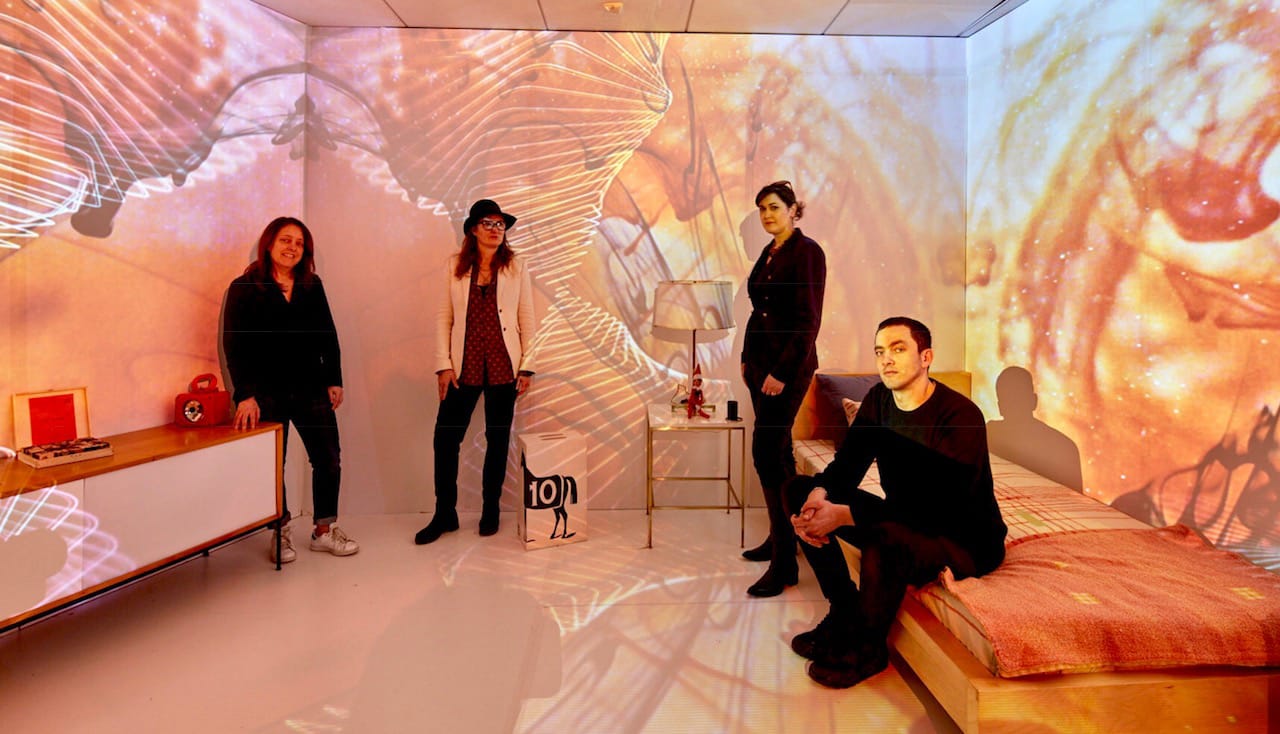 Both artists and curator converse with the audience, and explain the piece’s origin as they are all inundated by the ongoing dramatic visual effects transform the space blurring the lines between reality and fantasy. Extracted from a 2012 journal entry about Chris’ son and his relationship with James, his first Elf on the Shelf, the concept of this stranger from the North Pole was born.

“Spring Break art show is a very unique art fair in the sense that it is organized around one theme, this year being “Stranger comes to Town” based on the adage “There are only two stories: a hero goes on a journey; a stranger comes to town”. Through the exploration of trust and belief, mystery, and childhood, we wanted to explore the role a stranger may play in conjunction with a power dynamic through the lens of a child. The room, reminiscent of a child’s bedroom, is transported through memories, emotions, and experiences via projected mapping, film, video, sound, animation and visual art.

It’s a spectacle on itself to observe the audience interact with the room, decipher where to touch and observe the visual effects, as well as the story behind them. Children and adults, or artists and the general audience all move around the space with a different approach and reactions. ‘In this context, our site specific installation was very labor intensive once getting into the space, and we’ve worked successfully around the clock to provide the visitors the best experience of our interactive video and sound installation.” Undoubtedly this particular booth is a trip on itself, making the rest of the environment temporarily disappear and becoming a door to an alternate universe. 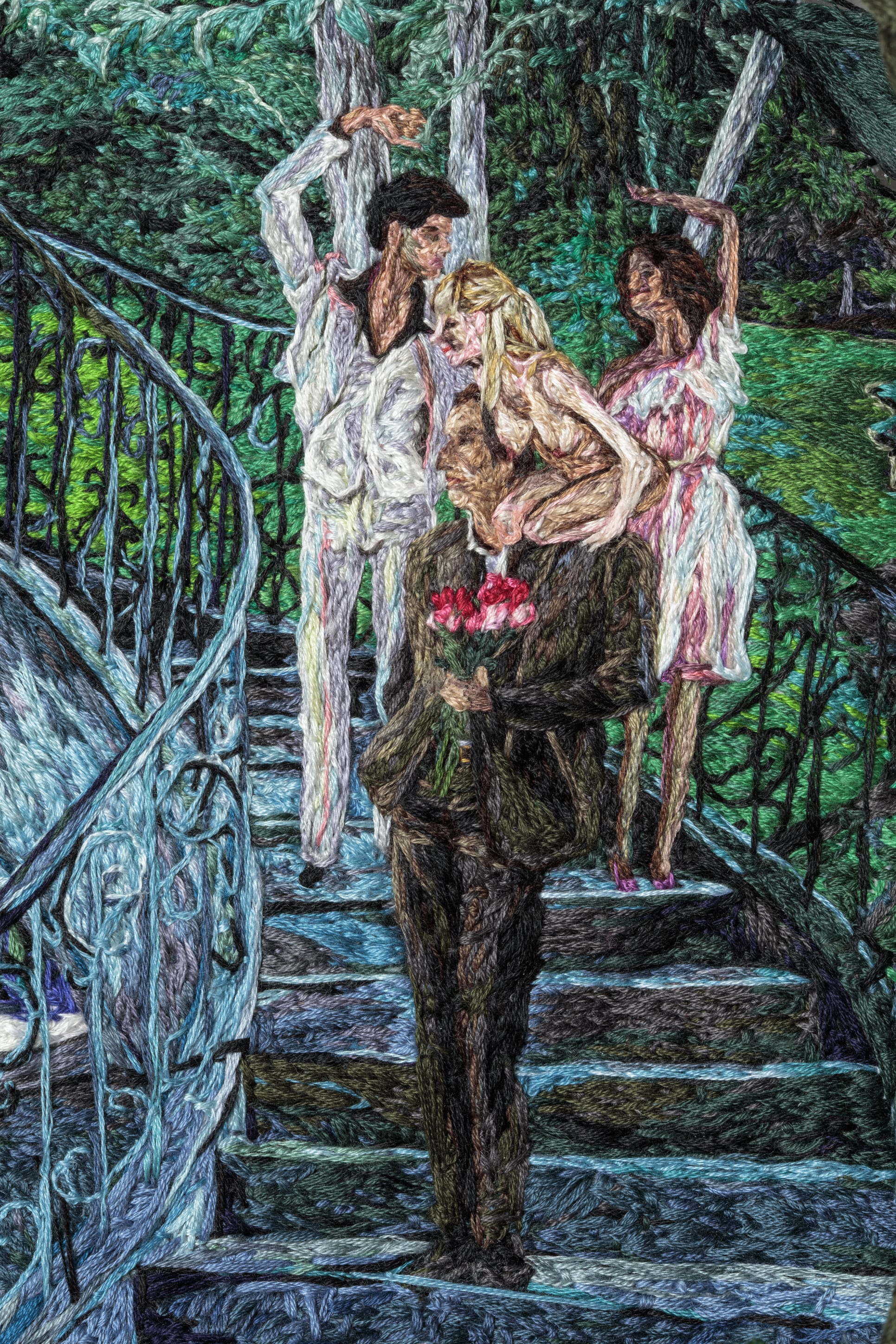 “Right Before” Detail by Sophia Narrett curated by Marie Salomé Peyronnel. Image courtesy of the curator.

Back into the reality of Spring Break, another obligatory stop was curator Marie Salomé Peyronnel’s booth, showcasing textile work by artists Sophia Narrett and Alessandro Teoldi. The peaceful balance of color and void brought a calmness that was very much needed among the density of the show. “It’s the third year in a row I curate a booth at SPRING/BREAK and it’s each time a wonderful adventure, bringing so many good things to my life and career. This year I presented Unveil, a two-artist exhibition with intimate textile works by Sophia Narrett and Alessandro Teoldi. I was interested in how they both explore their limits and strangeness. An insane amount of interesting people has visited my booth: from collectors, art dealers and museum directors to artists! I am already thinking of the next SPRING/BREAK! Sophia Narett’s figurative embroideries have even catched Jerry Saltz’s attention! The sales were also very good.” 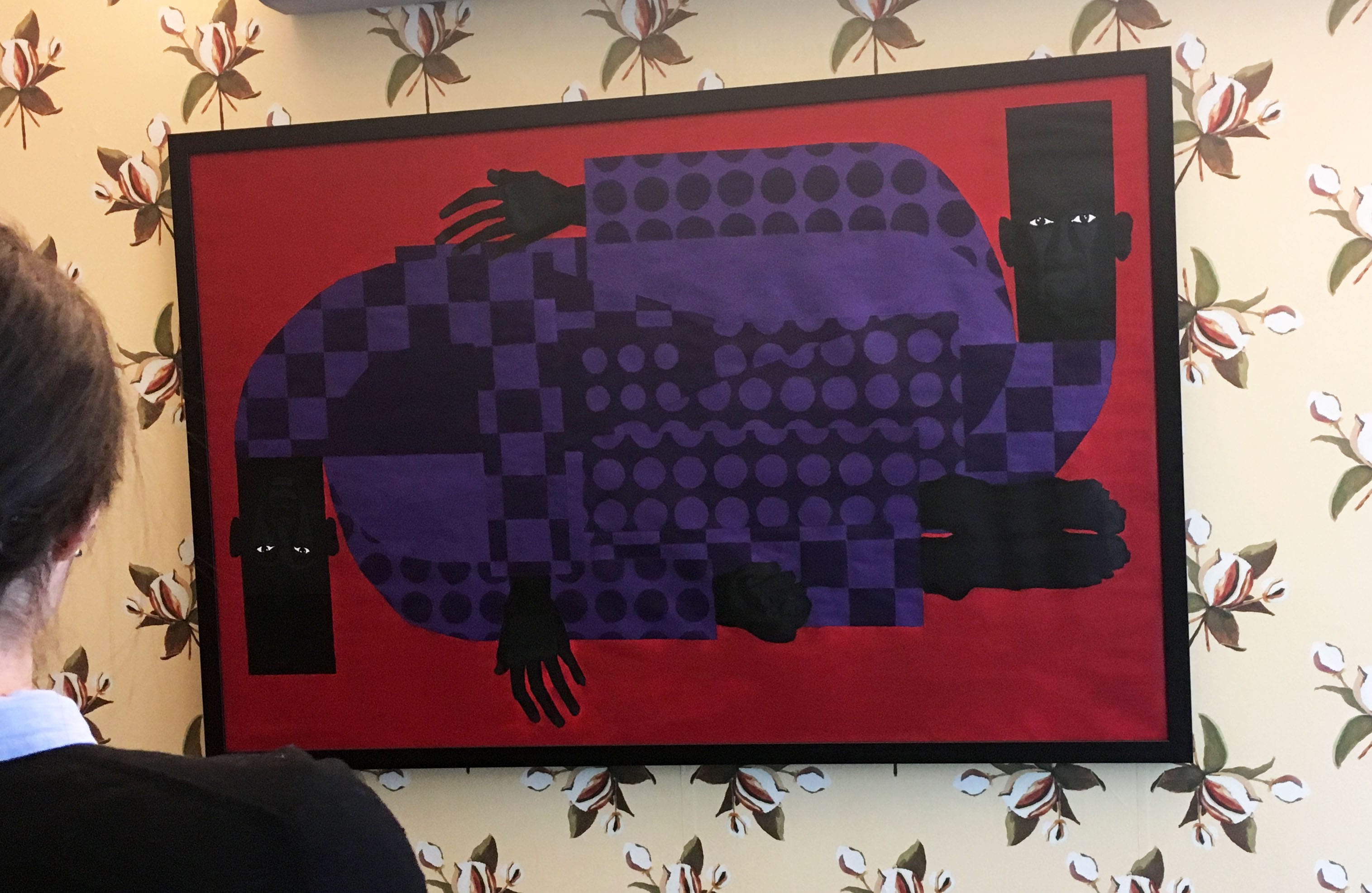 The UNTILL booth is a charmer; the balance, the colors, the effervescence. Alabama-borne twin artists Jarrett Key and Jon Key describe to the continuous flux of visitors the stories that fundament their work. Stories their ancestors orally circulated generation after generation. Just like Toyin Ojih Odutola does in her stellar portraits, the Key brothers are merging past, present and future to depict the family history that has been lost or erased. Using acrylic and oils, stencils and meditative mark-making, songs and verse, their storytelling transmedia creations build a comprehensive archival in an effort to share and understand their own story. Beginning in 1619 and leaping into the future, UNTILL is a timely and long-needed recollection of the chronicle that too many history books are leaving out of their pages.

“Returning to show work in SPRING/BREAK Art Show for the second year in a row has been so rewarding for us! Collectors, curators, artists and guests loved each detail of our booth UNTILL, curated by Son Kit and Sharina Gordon.” The Key brothers shared with The Overart “From the yellow cotton and magnolia wallpaper to the exclamation mark sculpture in the center of the room, we love sharing our family’s story and are grateful that so many people passed through to experience the art.”

Finally, as one would expect in response to this year’s focus on migration and xenophobia, many of the proposals adopted a political and activist approach. Ukranian borne Colombian artist Elektra KB’s “Power Is Abuse,” curated by Nico Roxe, is a multidisciplinary site-specific series of participatory installations that challenge the hierarchical structures that exercise power and the dynamics that consequentially subdue autonomy.

Fiber protest banners, an utopian check-point hut that invites visitors to get stateless, genderless passports and a ‘Freedom School’ occupy this mythos of equality, belonging and liberty. “In the CAT checkpoint you can renounce the allegiance to nation borders and gender borders, chauvinism, patriotism, and fascism. You declare that these concepts don’t define the true existence of the individual and are not a marker for human value.”
Due to the rise of systems of oppression via the nation state, the rebels of the Theocratic Republic of Gaia –the Catharas– have created the Stateless Autonomous passport.”

Equally political is Nate Lewis’ “Latent Tension,” curated by Dustin Yellin. In the intersection of photography, drawing, sculpture, etching, embroidery and fabric, his images seamlessly sculpt his character’s skin showing intangible competing elements of identity and perception. For this edition of the fair he used a photography series taken during the post-electoral protests in 2017, bringing a larger social movement into the intimate realm.

Currently in residence at Pioneer Works, Lewis’ sculpted paper photos delicately merge portraiture and figuration. Reminding us of Toyin Ojih Odutola’s early work, his characters are displayed in a void landscape, and defined by the expressive strata of meticulous work on the texture of their skin and clothing “In these works he sculpts out unseen tensions on bodies, representing them with an array of textures and patterns to reveal hidden layers of empathy.”

I leave the fair still believing in the real relevance of art. Thank you Spring Break Art Show for keeping us sane through art-supermart season. 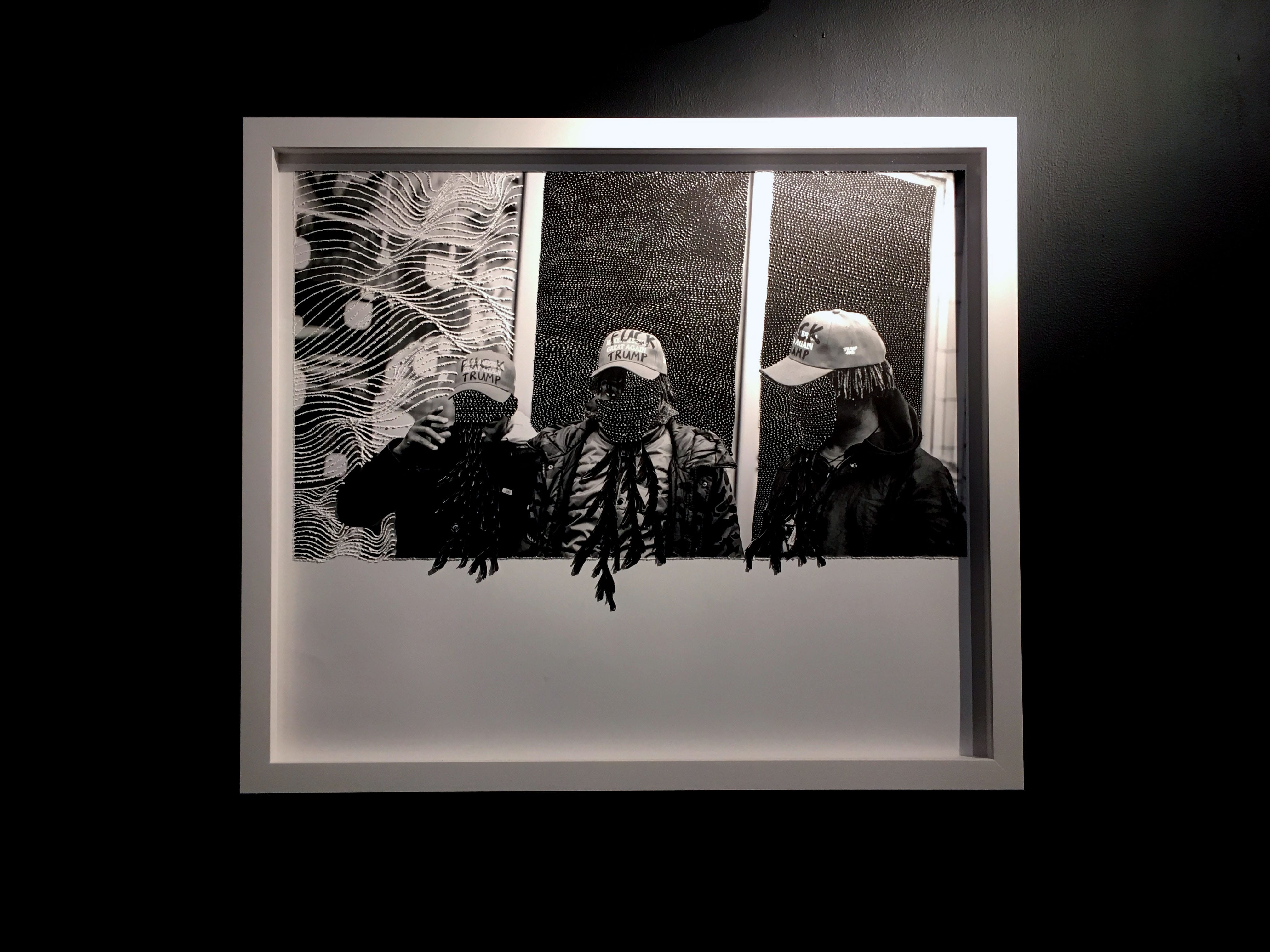 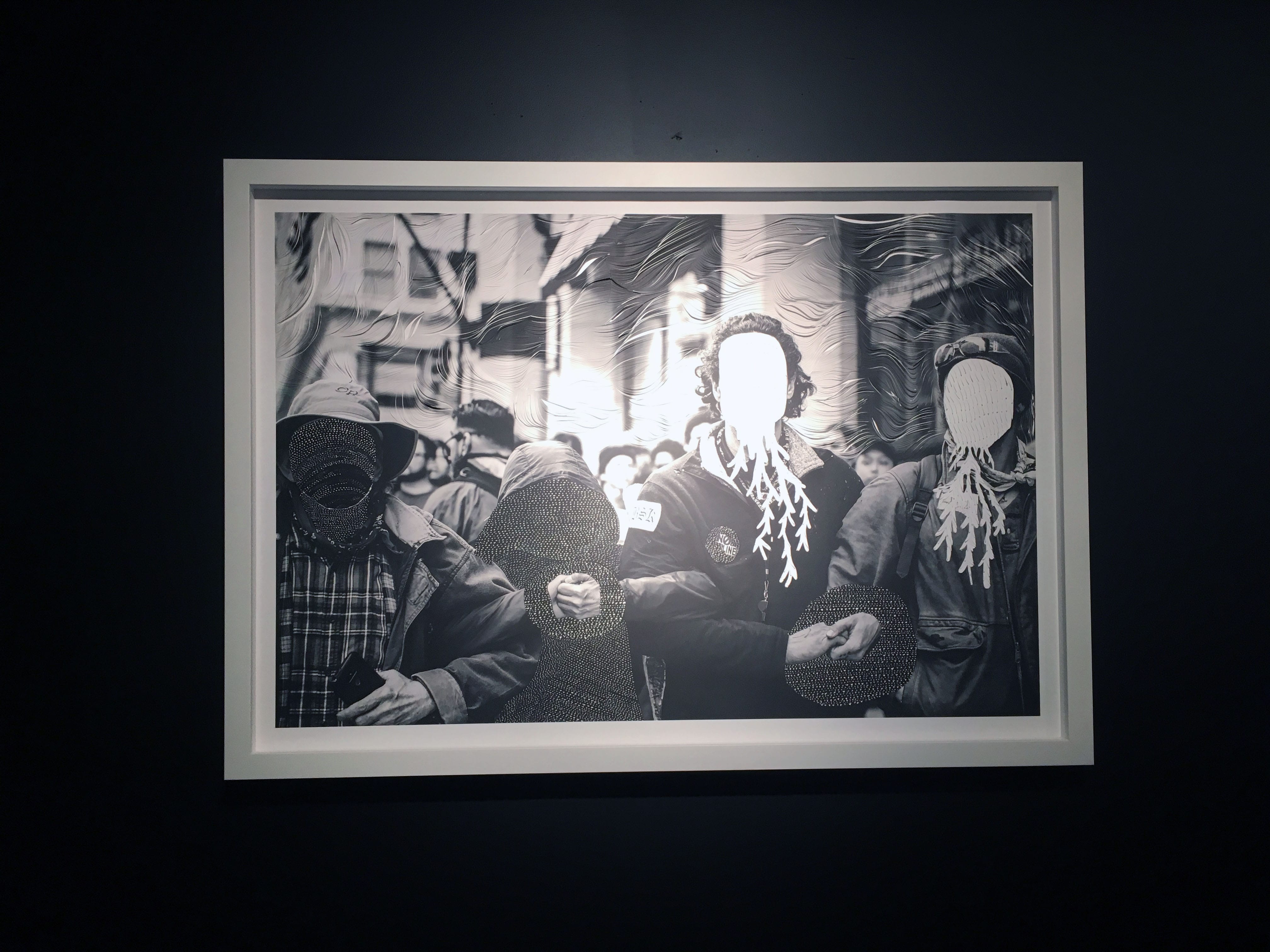